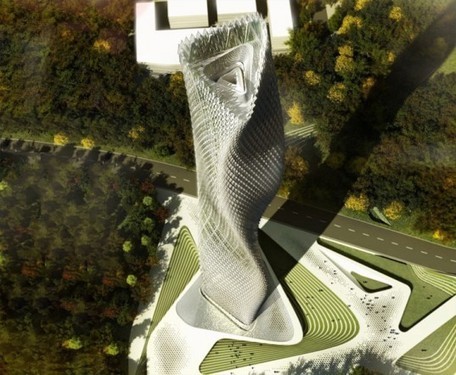 Beijing-based Decode Urbanism Office has designed a tower with a façade composed of multiple wind-driven generators.

Thousands of wind turbines will produce enough energy to power the entire building. At night, the diamond-shaped generators are lit with thousands of LED lights incorporated into the building envelope.

The 350-meter (1,150-foot) structure, in Taichung City, China, will house the city’s Department of Urban Development, as well as commercial activities.

The tower’s façade, inspired by the plum blossom — China and Taiwan’s  national flower – reacts to changes in direction and intensity of the wind, creating a truly dynamic visual effect. Similarly, mechanical wind power generators have LEDs, illuminating the façade and producing a pulsating flow of light, whose intensity and color adjust to correspond to changes in temperature and season.

The wind harnessing capability, along with the lighting that responds to local atmospheric conditions, makes this conceptual tower a true “decoder of nature.”