Posted by John Foster on January 12, 2015 in LED Lighting | Comments Off on Bringing new light to an old world LED Retrofit 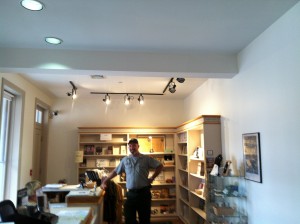 We at Complete Facilities Supply were challenged with the following task from one of our clients.

Is it possible to upgrade lighting in a house that was built more then 140 years ago and then converted into a museum without effecting the historical nature of the house, yet provide the lumens necessary to light up the exhibits?

One word, or abbreviation, came to mind. LED. The lighting industry has made great strides with LED lighting technology. At one time it was more of a problem then a solution. LED lights would produce light but not the kind of useful light that was needed. With improved lens and color correction, LED lights are exactly what this new world of energy savings and long life need. Following up after the walk through, we made the facility engineer aware of his options. Together we chose to use track lights fitted with LED’s

So we contacted Toshiba and went over our new project. The facility had in place 100 each of a 90 watt Par30 and 75watt AR111’s throughout the 2 facilities. Due to years of neglect, and not properly maintaining the light levels we knew we had to provide something that was going to last over a decade. So together with Toshiba, we decided to provided a 19.5w Par 38 LED with a color of warm white (2700K-3000K).

At the end of the project we sat down again with the facility engineer. We made him aware that the next time he would have to purchase or replace the track lighting lamps would be in 16 years. On top of that he would be saving on average about $65,941.67. Within 6 months the project would pay for itself with just the energy reduction. On top of that no more need to purchase lamps that would only last 1,000-3,000 hours.

Here are some photos of the finished result. 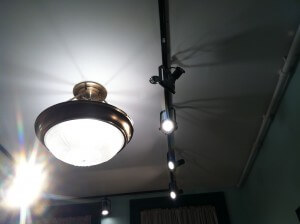 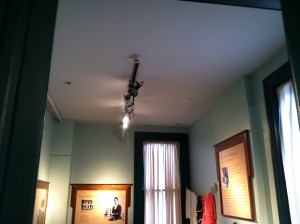 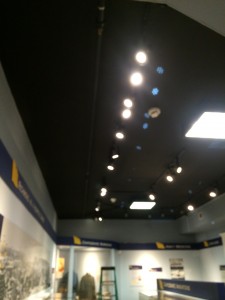 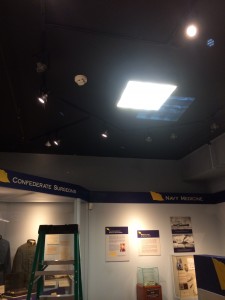 Another photo showing the upgraded lighting over the exhibits